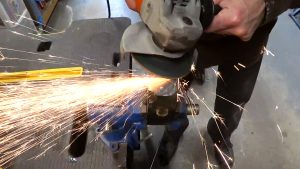 Greetings and welcome to Raven’s Roost Forge this is Tait and today we’re going to learn how to modify and dress a hammer for blacksmithing. Now the hammer we’re going to use for this is a three pound cross peen hammer from Harbor Freight I chose this hammer because it’s inexpensive it’s got a lot of excess material that we can work with and the cross peen is going to be really valuable for a number of forging applications. For instance if we want to be able to spread out material in width without significantly increasing the length you want to use a cross peen to do that. Now what I’m actually doing here is marking out the portion of the hammer that I want to remove. This is a three pound cross peen and I’m actually most comfortable forging with a two and a quarter to two and a half pound hammer so that excess material has got to go. So I calculated how much I need to remove and then I’m just marking out how much I need to cut off, I’m trying to remove about half a pound of material here.

Now that the hammer is marked up I want to go ahead and set up a vise so that I can secure the hammer when I’m actually trying to do the grinding and the cutting on there. You want to make sure that your work piece is secured well because a four and a half inch grinder and a loose work piece is a recipe for disaster.

So at first what we’re going to do is just make a score all the way around and I’m trying to stay as close to that mark as possible and then we’re going to go and make deeper and deeper cuts until we cut all the way through. The reason you want to go around the whole piece and cut in little by little is that’s how you’re going to get the most flat and even surface if you try to cut all the way through from one side, chances are your cut is gonna wander and then you’re going to end up with a hammer head that’s way out of square and you’re gonna have to grind that back to square before you move on.

Once you’ve made the initial score and you’re ready to start taking deeper cuts you want to make sure that you cool off that hammer head frequently because you don’t want to overheat it and end up drawing the temper and then softening the hammer head. Now since this is an inexpensive Hammer chances are it’s already a little soft so we don’t want to make that any worse by overheating the head when we’re cutting it, so make sure you cool it off frequently.

If you look closely here you can see that I’ve cut most of the way through there’s just a little thin portion that I still need to get through, but unfortunately the battery on my other angle grinder died so you can see that I switched to a corded version.

Oh and there goes that little piece, now we’re going to cool off that head one final time and take a look at what we got. It’s relatively flat and square which is just what we’re looking for and let’s take a look and see how much of a piece we actually were able to get.

Okay looks like it’s about nine and a half ounces which is pretty close to what I was trying to do I was trying to take off half a pound, so I was going for about eight ounces I got just a little more than that. When the final grinding and polishing is done that’ll take off a little more so we’re probably looking at around two and a quarter pounds which is perfect. So right now we’re just using a hard grinding disc in order to kind of flatten out the imperfections and get a relatively flattened square face and then we’re going to go around and put a chamfer or a bevel all the way around.

Once the hammer face is relatively flat and even we’re going to switch to a flap disc and then we’re going to kind of polish up that face as well as add a crown to it we want a nice generous crown across the face in order that we don’t mar up our work piece as we’re hammering. It also makes the hammer a little easier to control because you’re much more likely to be able to strike with the center of that face.

Okay, now we’re starting to get something that looks a little better for forging with. We got a decent polish, a little bit of a crown although I’m going to want to put a little more crown on there I think before I’m through. You can see that what I’m gonna go ahead and do is just kind of do some light strikes with the hammer on the anvil face and what I’m looking for is to see that when it rebounds that it kind of rebounds straight back up. If the hammer is ground unevenly then it’s going to want to bounce off in an odd direction rather than rebounding straight back up. We’re also going to need to dress the peen as well typically the peen is far too narrow to make a good forging hammer when you buy them straight from the store like this especially a less expensive hammer a very slight crown across the width of the peen also helps to control when hammering and reduces marring of your work. So what I’m doing here is just putting a little Sharpie on the face and the peen of the hammer and then we’re going to go over to the anvil and we’re just going to strike very lightly and see where the hammer is falling the marker will just rub away where the hammer actually meets the anvil

Now you don’t actually need an anvil yet for this part you can use any flat piece of steel to find out if the hammer is striking square.

And here you can see that the marker rubbed away pretty close to the center and that’s just what we want, we want to be hitting right in the center of that hammer face. We’re going to check the same thing on the peen and it’s hard to see but we’re just making contact with the center on that peen as well. So now we’re just going to take a little denatured alcohol and we’re going to clean off any remaining Sharpie and then we’re going to sand and refinish the handle next.

To refinish the handle we’re just going to start with some fairly coarse sandpaper like around 60 grit so we’re going to remove all of that original finish the varnish or polyurethane that’s typically coating most hammer handles from the store is really hard on the skin when you’re doing hammering for a long period of time and you can end up with hot spots and blisters and so forth so I prefer to go ahead and remove that and then just put a little penetrating oil over the bare wood and that’s much more comfortable for forging over the long term.

So I’m going to go ahead and finish off by sanding it down with a little finer grit this is a 100 grit, about 120 grit, 150 grit is about as high as I typically will ever go with a hammer handle. I don’t like it to be super smooth because I prefer it to be a little more grippy

Now I like to use Danish oil for most of my wood finishes and Danish oil does actually have a little bit of varnish in it it’s a combination of varnish and penetrating oil but that varnish does not build up significantly on the surface it penetrates and absorbs well into the wood and it gives you a really nice finish that is really comfortable in the hand. A pure penetrating oil like boiled linseed oil also makes an excellent finish. Some people even elect not to finish their handles at all but this can result in swelling and shrinking of the handle depending on the amount of moisture in the air and you can end up with a hammer head that just doesn’t fit well and is loose on the handle. This is much more likely to happen if you don’t finish your handle. Now when you’re using a penetrating oil like this you want to kind of wet the wood down with the oil and then allow it time to soak in and if all the oil soaks in you want to wet it down further you want to keep doing that until it stops absorbing and when there’s no more oil being absorbed you want to wipe away any excess. You don’t want to allow the excess to dry on the handle. So this footage here actually is after this hammer has been used for several projects you can see that the face dinged up a bit so it is kind of soft but overall it held up pretty well and it works nicely. So I hope you enjoyed this video and you learned something, don’t forget to like and subscribe. In the next video we’re going to learn how to take a small tabletop barbecue grill and turn it into a forge.

No comments to show.